The Disservice to Your Patients

Leadership is a buzzword that we hear far too often when we are talking about the attributes we want to see or develop in ourselves, our families, and our employees. It seems to be the holy grail of human behavior but most of us haven’t ever been instructed in “Leadership” in any significant way. We only have a vague idea of what leadership is, much less being able to accurately define it.A quick online search gives us this definition: Leadership is the art of motivating a group of people to act toward achieving a common goal. In a business setting, this can mean directing workers and colleagues with a strategy to meet the company’s needs.This seems overly and complicated to me and doesn’t address the moral obligations of leadership. My personal definition of leadership is a bit simpler: doing the right thing. Encouraging and creating a path for others to do the same.

I was talking to my hygienist today between patients. She had a printed schedule and knew exactly which patients were due for BWX and Pans. If there were children on the schedule for that day, she would have known which ones were due to have sealants placed. She was mentioning that some assistants don’t like to work with her initially because she insists that they take the recommended radiographs at the recommended intervals. Or, she will request that the assistant have the sealant kit in the op and the mother presented with this option as soon as they walk in.Now I’ve watched her “insist.” She’s nice and tries to be encouraging. She’s also done the “busy” work of researching each patient and has everything marked out for the assistant. After a while, most assistants appreciate the fact that they are doing the right thing for the patient and that they (the assistant) can be proud of the thoroughness of the work that they’re doing.Now it wasn’t always this way. Initially, when this hygienist came to work for me, she just wanted to do a good job and have patients like her. She didn’t want to create any waves with the patient or the staff. The problem was that I required that radiographs be taken on a certain schedule and that we not bring patients back for a second visit if we could get their work done while they were here already.Initially, these ideas were resisted. When she realized that, “They come here for us to take care of them and if we’re not doing that, we’re really doing them a disservice,” (her words not mine) it was adopted. Now, the standards are a source of pride.

During our conversation she commented, “Well you know that you made me this way.” I pointed out to her that she had become a leader in the office precisely because she held the standard and insisted on others not avoiding them. She had also helped to create a path for others to follow. It was all her. I was just holding the standard. thinking through this conversation, it occurred to me that maybe leadership is “caught” rather than “taught.”

I guess the question is: “What are others catching from us?” 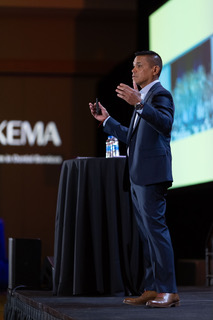